Biological control or biocontrol is the suppression of populations of pests using living organisms. Since 2016, the Alberta Invasive Species Council (AISC) has been the project coordinator for a biocontrol release program using host-specific insects for invasive plants in Alberta. The program reintroduces proven specialist insects to invasive plants from countries where they originated, weakening the competitive advantage these plants gain from escaping their natural predators in their invaded range. Biocontrol agents are self-sustaining and require little input after they are released, making them a valuable tool in integrated pest management programs.

The Alberta biocontrol release program started in 2001 as a collaboration between the weed biocontrol research team at Agriculture and AgriFood Canada (AAFC) and seven Agricultural Fieldmen in southern Alberta. Drawing on over 50 years of research screening and establishing specialist biocontrol agents for invasive plants, the initial invasive plant targeted was leafy surge— an invasive species from Europe that crowds out native species and produces a sap that is toxic to cattle. Since 2001, the program has expanded to include additional targets, such as houndstongue, Dalmatian toadflax, and knapweeds, and has continued to build on AAFC research into new biocontrol agents.

With ongoing support from stakeholders, coordination by AISC and research expertise from AAFC, the program has grown from the initial group to collaborate with over 39 different organizations throughout Alberta. Together this partnership has now released and monitored biocontrol agents at over 1,300 locations. Monitoring data collected by the program is reported back to AAFC to improve the implementation of future biocontrol agents.

The program is entirely funded by participants and is operated by AISC as a service for invasive plant managers and landowners to purchase biocontrol agents along with expert consulting on their use.

The program currently offers biocontrol agents for the following invasive plants for 2022:

A biocontrol agent release costs $900.00 + GST. Included in the cost is a pre-release consultation where AISC staff provide advice on release site selection as well as optional training on how to monitor for biocontrol agent establishment.

If you are interested in learning more or ordering biocontrol agents for any of the listed invasive plants please contact:

Leafy Spurge (Euphorbia esula) is an herbaceous perennial weed that produces a milky-coloured latex sap toxic to most livestock and an irritant to human skin. The plant reproduces through creeping roots and through seed pods that shatter dispersing seed several meters away. Leafy spurge grows well in many different habitats and can become a dominant species in pastures and rangeland if not managed. In Alberta leafy spurge is classified as a noxious weed and is a common sight along riverbanks where the weed has spread downstream through periodic flooding. 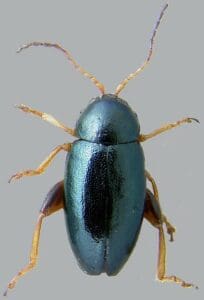 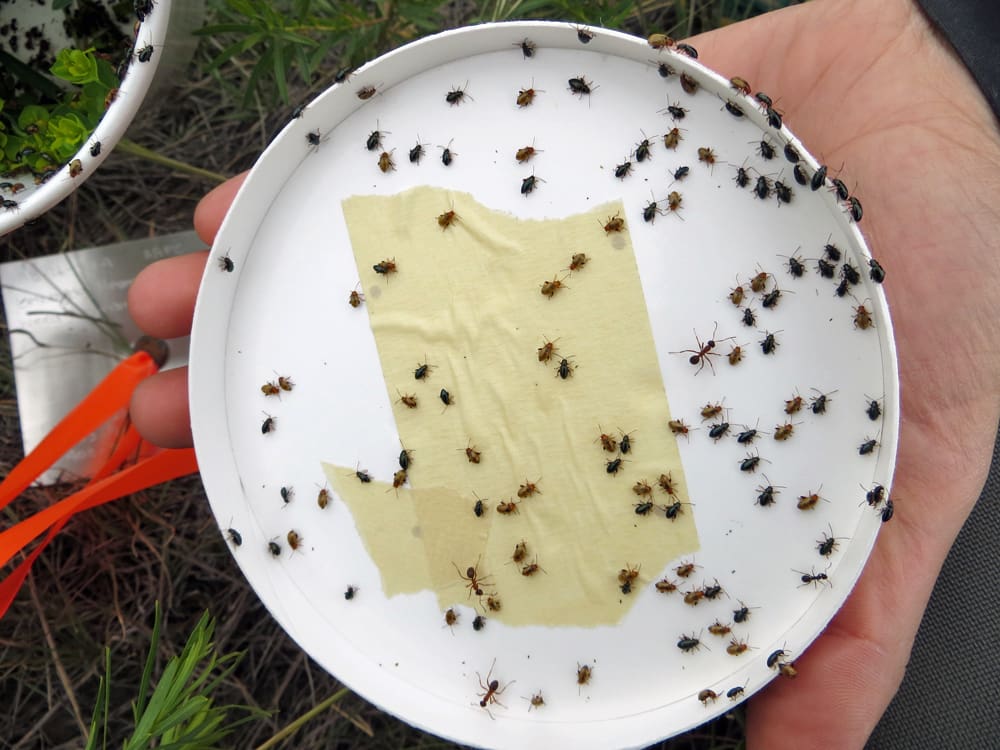 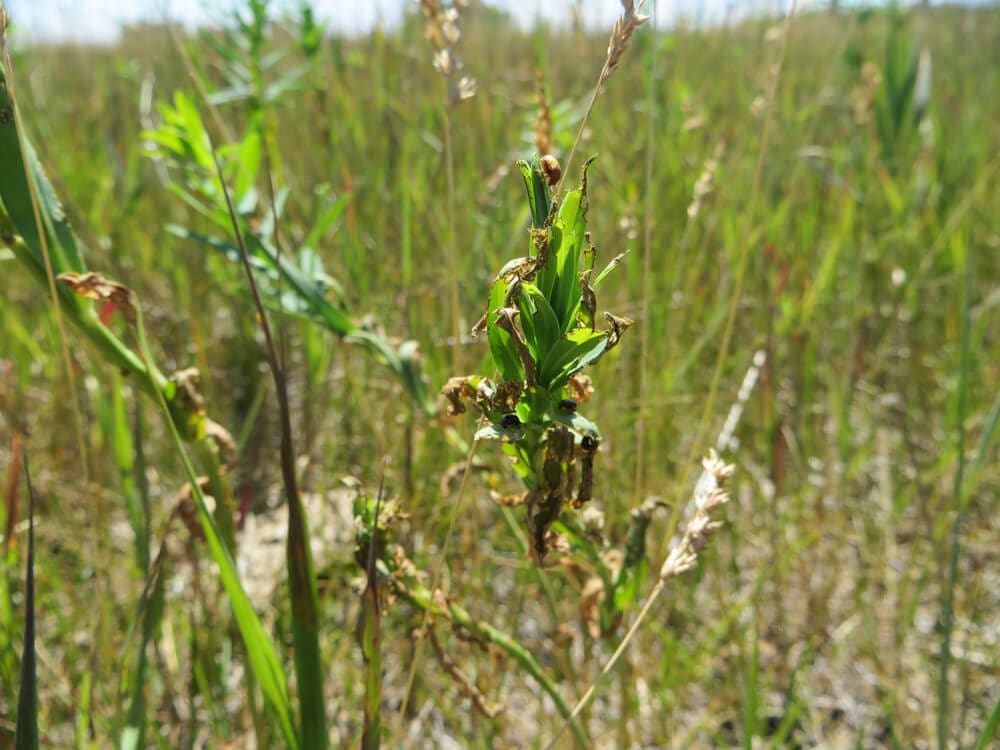 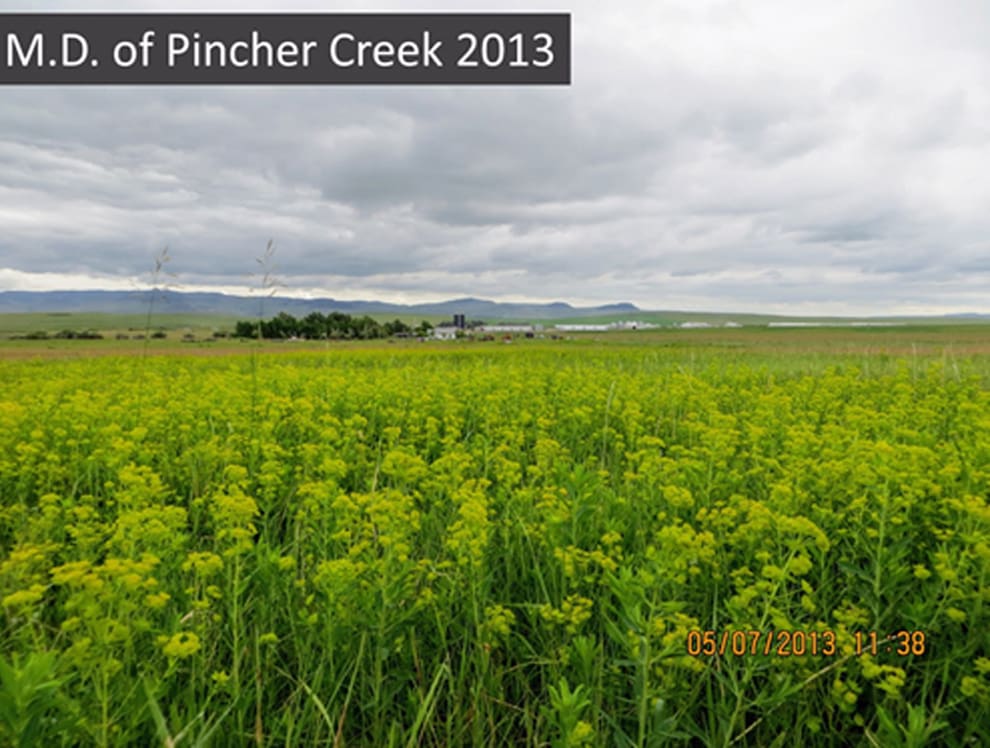 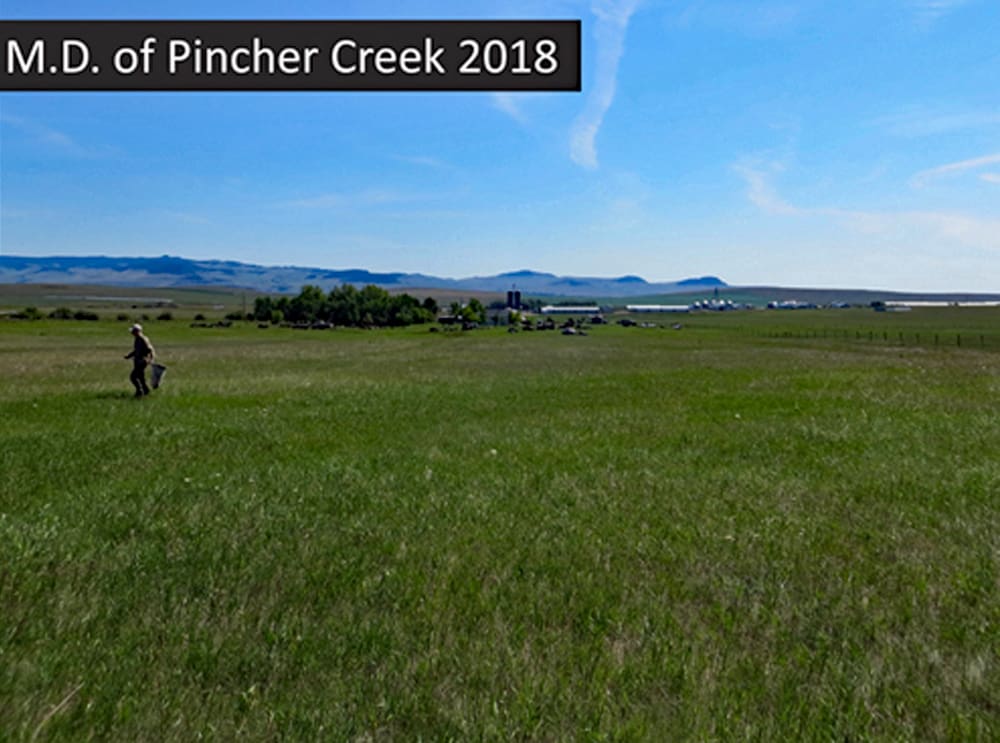 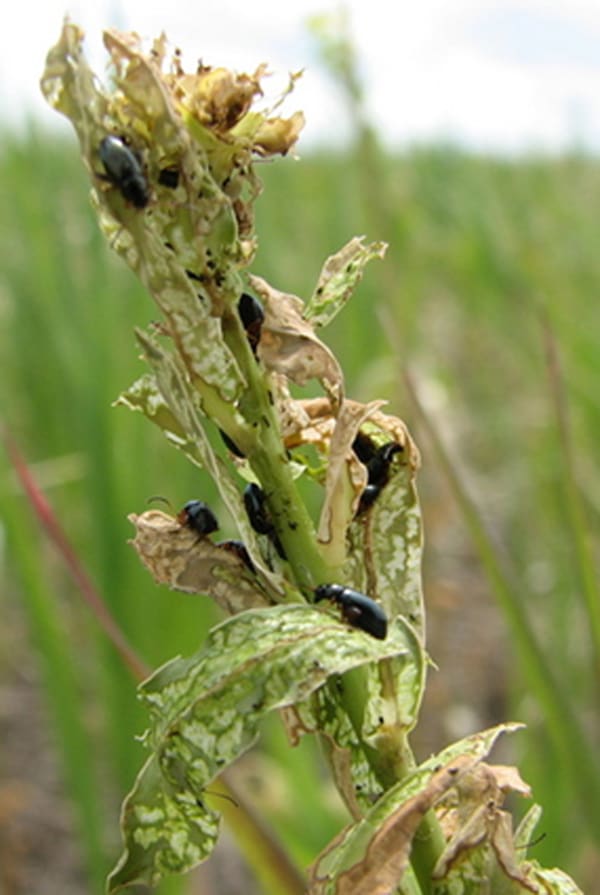 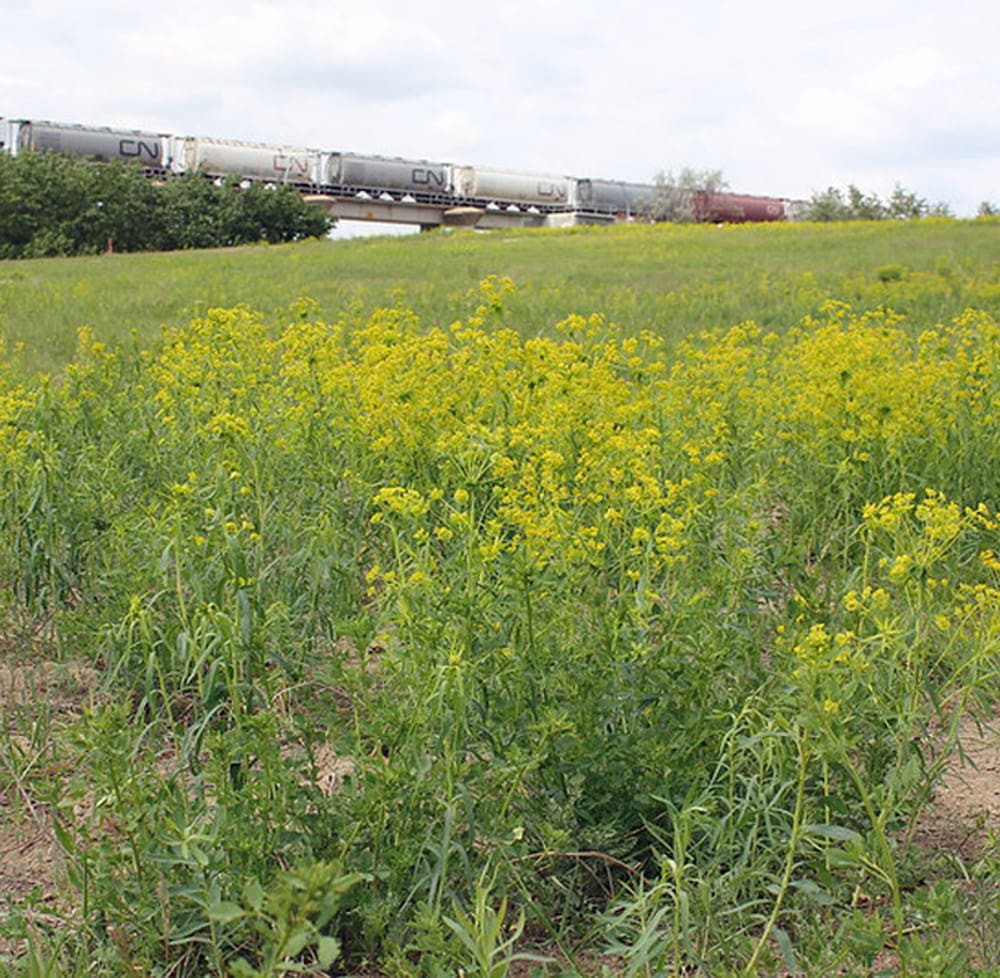 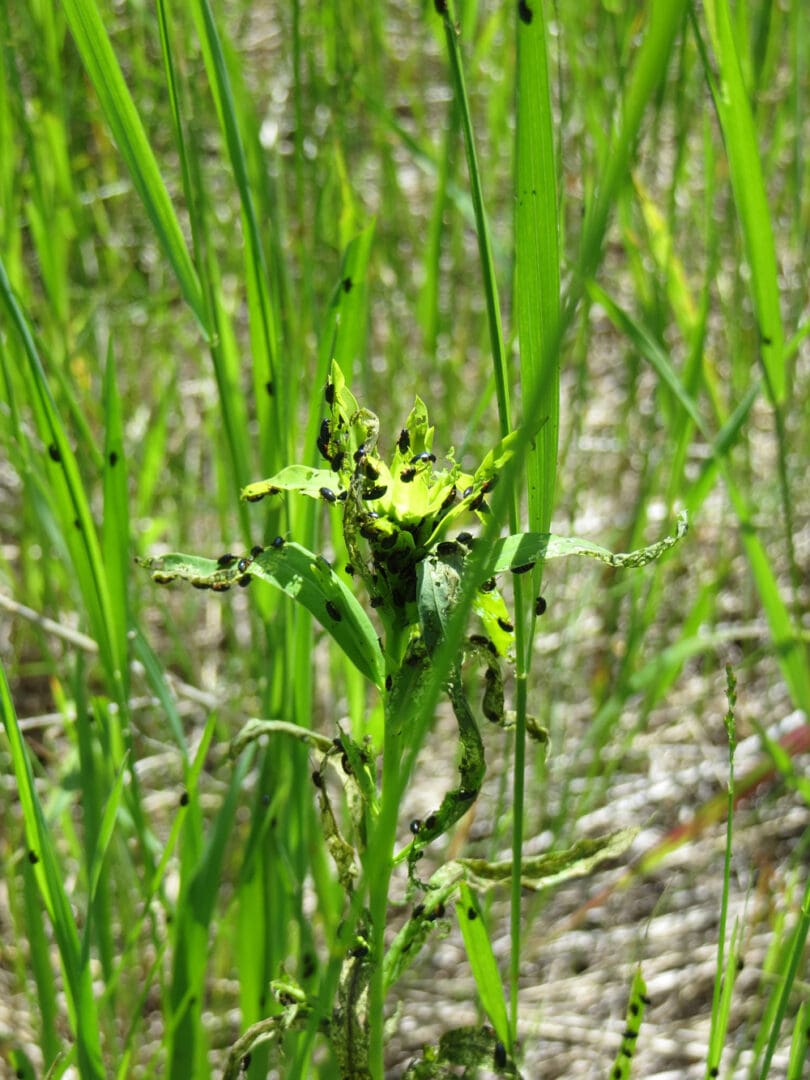 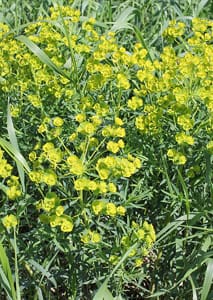 Dalmatian toadflax (Linaria dalmatica) is an herbaceous perennial that commonly invades disturbed areas and sites with coarse textured soils. It reproduces through both creeping roots and seed that can remain viable in the soil for up to 10 years. In Alberta Dalmatian toadflax is classified as a noxious weed. 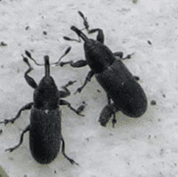 The stem weevil Mecinus janthiniformis is a biocontrol agent for dalmatian toadflax. Adult weevils feed on toadflax leaves causing a distinct ‘shot hole’ pattern the upper leaves that stunts plant growth and suppresses flowering. Female weevils lay eggs in toadflax stems and larvae mine out the tissue inside the stem causing desiccation and die off. Larvae pupate and overwinter inside the toadflax stem as adults and emerge in the spring as dalmatian toadflax plants are first sprouting. 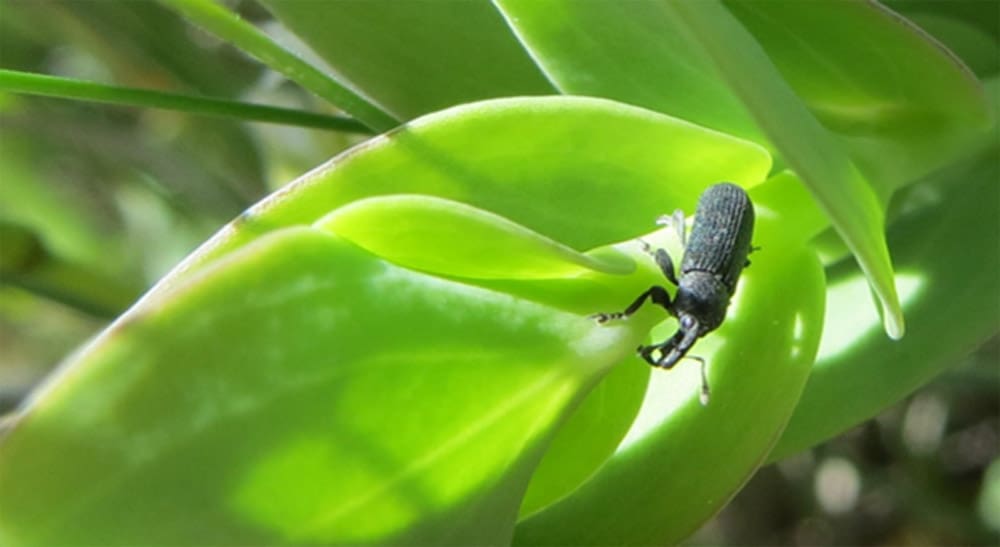 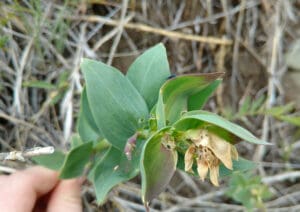 How to Release Seed Head and Root Weevils 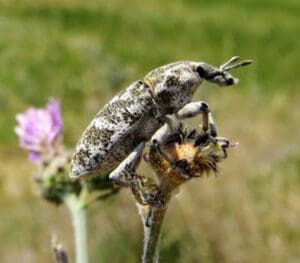 The biocontrol release program provides two separate species which can be released in tandem on both spotted and diffuse knapweed. The first is a seed-head weevil (Larinus minutus) that lays eggs in knapweed flower heads. Larvae from this species eat all the seeds within one flower reducing knapweed seed output. After four weeks, larvae pupate inside the seed-head before emerging as adults. Adults chew out of the top of the seed-head creating a distinct hole and chamber where the weevil pupated. Adult L. minutus feed on knapweed leaves causing stunted growth and at high densities can cause the plant to die. The second knapweed biocontrol agent is a root weevil (Cyphocleonus achates) that lays eggs on the root crown. Larvae from this weevil tunnel through the knapweed’s tap root stunting plant growth and exposing the plant to bacterial and fungal infection. Because L.minutus and C. achates attack different parts of the knapweed they do not compete with one another and can be used together at a knapweed infestation to maximize control. 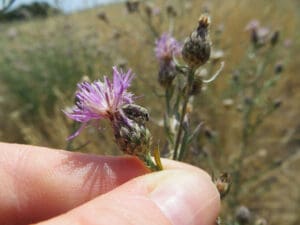 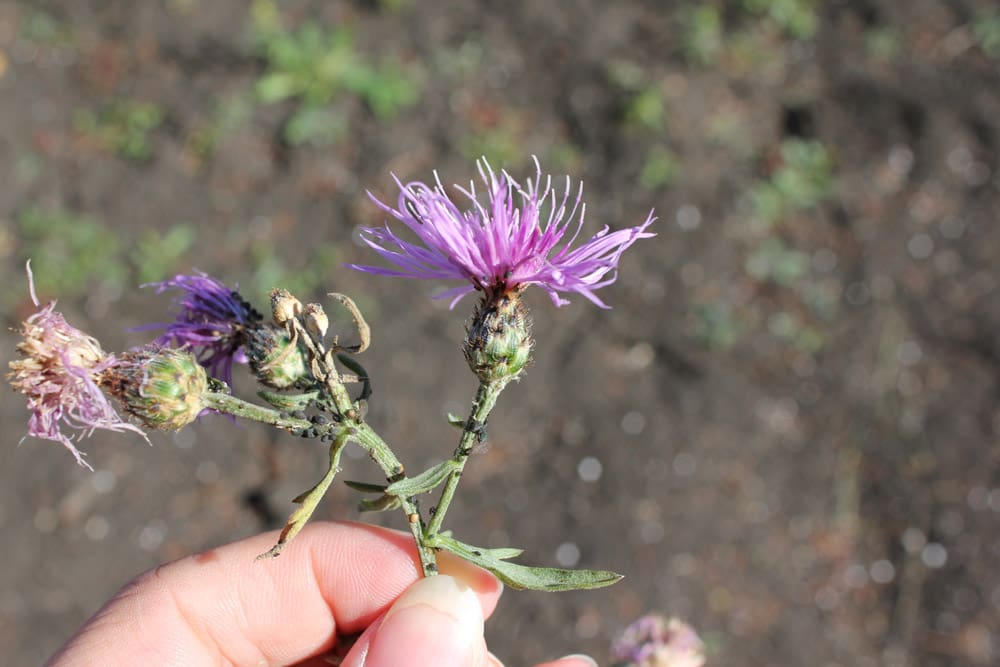 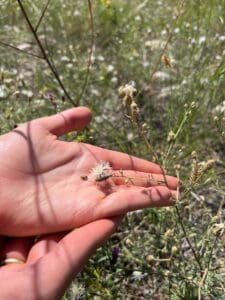 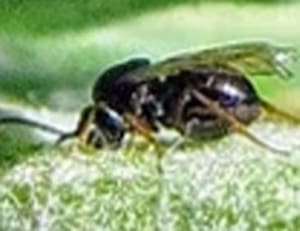 The gall wasp Aulacidea acroptilonica is a biocontrol agent that lays eggs in the stem of Russian knapweed. The larvae emerging from the eggs feed inside the stem creating a tumor-like growth called a gall. These galls draw nutrients away from the plant limiting plant growth and reducing its ability to produce flowers and seed. Larvae overwinter in galls and pupate early spring before emerging as adults ready to lay eggs as soon as Russian knapweed rosettes are up. Adult A. acroptilonica wasps do not have stings and cannot harm humans. 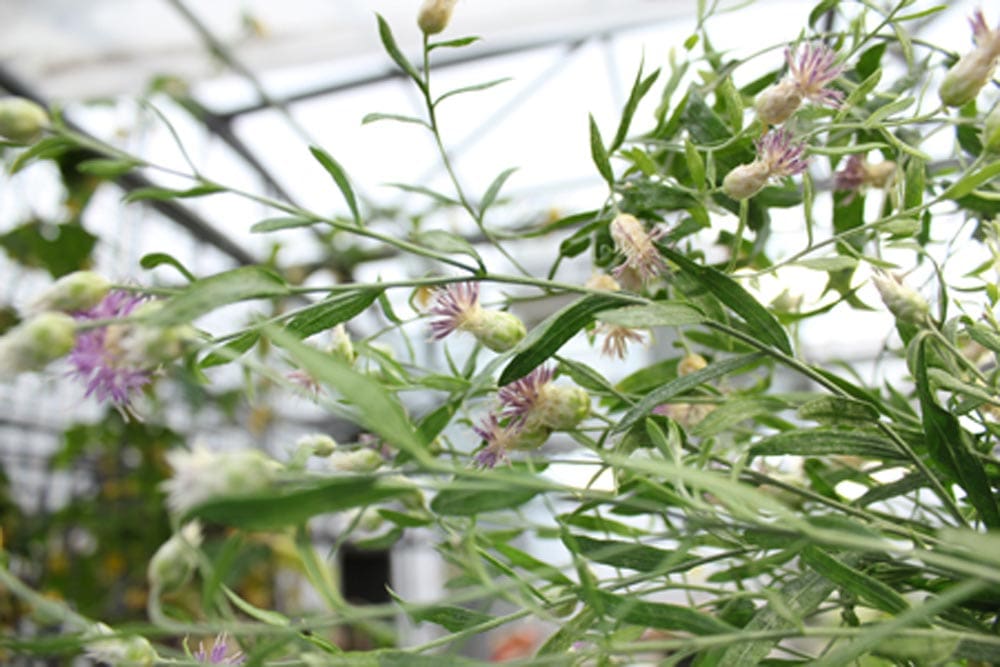 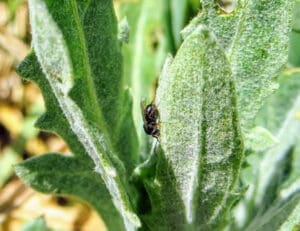 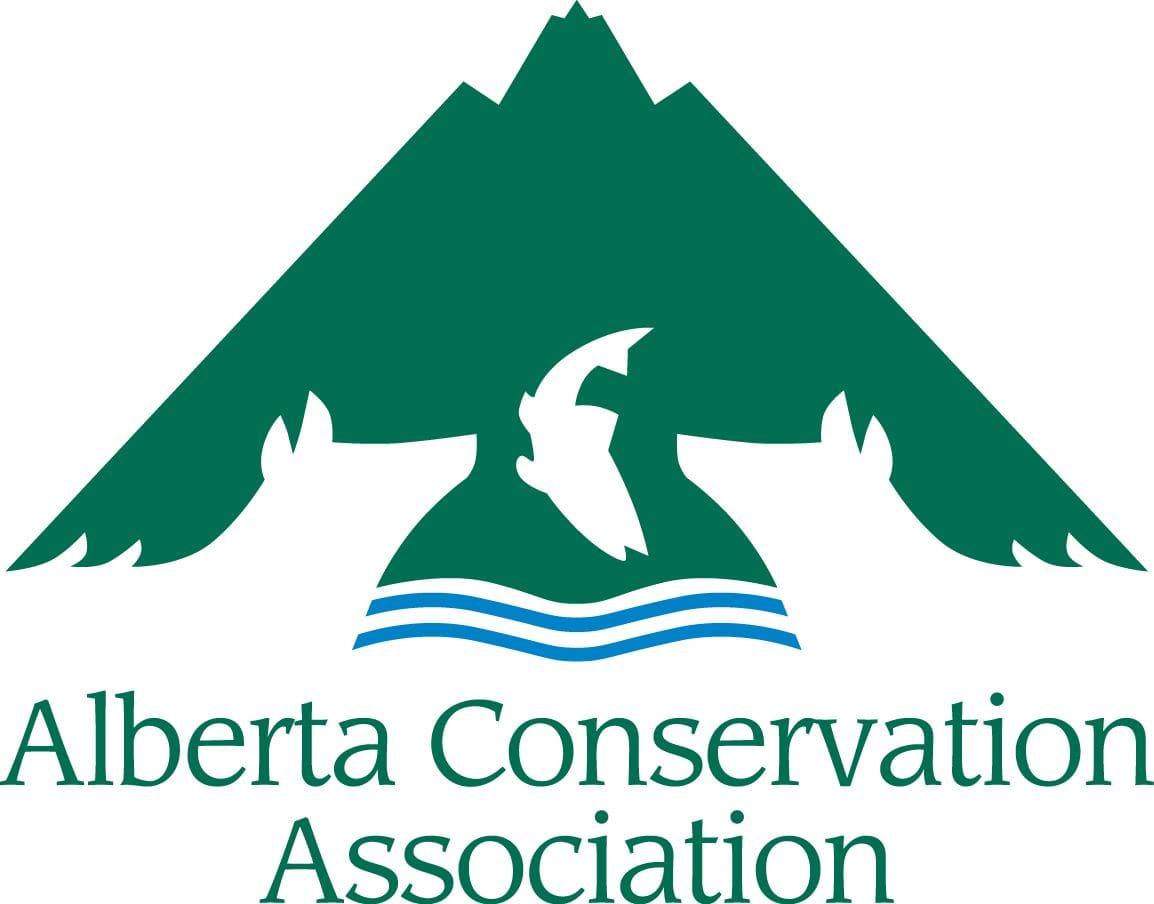 Scentless chamomile (Tripleurospermum inodorum) can behave as an annual, biennial, or perennial weed. It reproduces by seed only but can be very difficult to eradicate in crop situations. The plant typically invades disturbed sites and is transported to new sites by seeds that float or through contaminated weed seed and livestock forage. In Alberta, scentless chamomile is classified as a noxious weed. 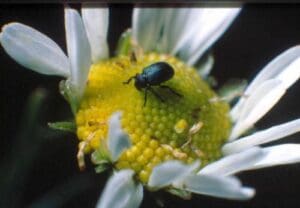 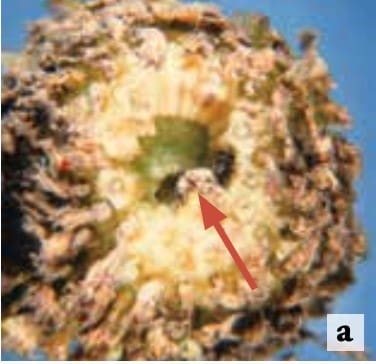 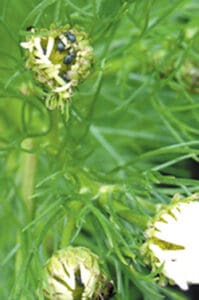 All photos by Karma Tiberg, courtesy of AAFC, not for re-publication or any other use without express consent of AAFC